With election season starting to heat up, so is reporting on the so-called “middle class.” Apparently, 9 in 10 Americans consider themselves “middle class” (I’m no math genius but something tells me medians and averages don’t work that way.) Given most Americans are middle class in their minds, and middle class today isn’t what it used to be, in short, everyone is freaking out.

Ok middle-class math, why does America hate you so much?

“The middle-class label is as much about aspirations among Americans as it is about economics. But a perspective that was once characterized by comfort and optimism has increasingly been overlaid with stress and anxiety.” — Telegram

I see. So most Americans aspire to be middle class, as everyone has been sold this dream of working hard to get the basics in American life — a decent house, backyard, education, healthcare, maybe vacation once a year. No one is expecting to afford regular Gucci on a middle class income. We were just all told work hard and you too can be middle class, and quite frankly upwardly mobile from your parents lifestyles. Yet, even if you’re doing exactly the same thing your parents did, you’re actually worse off today. No wonder we’re all anxious.

“A recent report from economists at the Federal Reserve Bank of St. Louis concluded that “families that are neither rich nor poor may be under more downward economic and financial pressure than common but simplistic rank-based measures of income or wealth would suggest. The study, conducted by William R. Emmons and Bryan J. Noeth, found that one reason many Americans viewed themselves as struggling was that their real incomes had not advanced significantly beyond their parents’ even when they reached higher educational levels, while those who matched their parents’ achievements were actually worse off.”

The New York Times published an article this week titled “Middle Class, But Feeling Economically Insecure.” That headline, brilliant, sums the middle class anxiety up to a T.

END_OF_DOCUMENT_TOKEN_TO_BE_REPLACED

As many of you know, one of my favorite budgeting tools is Mint.com – so I was a little giddy when their PR team reached out to me to include me in their “Expert Interview” series. I went to town answering questions on my networth goals, progress, ups and downs.

I’ll post the introduction to the article below, and then if you’re interested you can read the rest of the Q&A here. I am actually very proud of this Q&A because the answers really reflect the personal finance advice I would give to anyone at this point in my life!

Imagine retiring with $2 million in the bank. Now stop imagining that goal and make it a reality.

With Her Every Cent Counts, readers get all kinds of tips and encourage to start building a net worth they can be proud of. That’s not to say there isn’t a lot of hard work involved. In fact, the woman who started the site (who prefers to be anonymous) had a net worth of $250,000 by the time she was 30. She plans to grow that number to $2 million by the time she retires.

Her net worth tracker can be found on her website where readers can track her progress. This serves as an inspiration and real-life glimpse into what is possible when saving money.

To learn more about reaching your own financial goals, take a look at the helpful information in the interview [here.]

I’m reading a Newsweek article entitled “Stop Saving Now!” It’s overall message, if you couldn’t guess from the title, is that in order from our economy to recover we – as a society – need to start taking more risks and throwing our fiscal caution to the wind.

This brings to mind a time when I received an allowance and I had a choice to save the money or spend it. My parents would advise to save it so I could buy something bigger than what I could with just a few dollars. At that point, there was no risk in not receiving more allowance, but nonetheless the general principle was that risk-free “saving is good.”

It almost makes me ill to think that our entire economy revolves around – well – greed and bad decision making. Not that penny pinching is the way to go, but when an article compares our entire society to Las Vegas casinos (where gambling revenue is down — in January, Nevada’s casinos reported, gamblers lost 14.6 percent less money than they did in January 2008, notes the article), I start to get a bit queasy. Why should we be expected to live our lives with such high risk in order for our economy to work? Isn’t there something wrong with that equation?

“It’s tempting in this period of contraction to mimic Thoreau, to live simply and deliberately. But if we lose our penchant for gain and risk, we’ll lose some of the essence of what makes us American.”

Have you ever lent money to a friend or relative? In times of economic hardship, more and more often our friends come to us with a request to borrow funds. Or maybe we are at a loss and need a few bucks to get by for the month, and we ask a friends to spot us the dough.

The New York Times reports that it’s best to stop and think before lending money to anyone, even a good friend. The article highlights a professional financial planner who ended up lending her manicurist(!!!) $3000. Her manicurist needed the money to avoid eviction, and tugged on the emotions of a woman who would otherwise advise clients not to lend money to personal acquaintances.

For me, I like to lend money to people in need, but not to my close friends. Instead, I use Prosper’s P2P lending system. At least I can do a credit check on the person before deciding to lend them money, and I can earn a decent amount of interest back in return. (Then again, it looks like it will be a while before I can lend on Prosper due to some legal trouble they’re in.) If I were every to lend money to a close friend, I’d have to think of it as a gift when I part with the funds. If I get it back, all the better.

What’s the most you’ve ever lent a friend? Did you get that money back, or did it ruin your friendship? 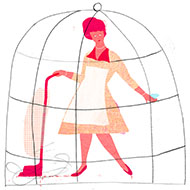