I believe that most, if not all of our psychological disorders stem from the need to be in control, and the reality that control – even when felt certainly – is an illusion. You can be Albert Einstein or Britney Spears, and in the end still end up six feet under, eaten by worms, and eventually dissolved into a thousand nanoscale bits spread across the universe.

Of course, on a day to day basis, control is more about feeling an ownership of time instead of time owning you. It’s about accomplishments large and small. It’s about praise and pride. Success has never felt like control to me, however. Success is the scariest feat of all… because once you succeed, the expectations are higher the next time you try, and you have a lot further to fall.

This leads to my admittance that — my name is Joy and I’m a — addiction-aholic. That is, there are a lot of things I do that i wish I didn’t do that I haven’t been able to stop myself from doing, or things I should do that I can’t force myself to do as often as I should. That is unhealthy, and something I’d like to solve in any way possible.

Luckily, I never ended up addicted to drugs or alcohol, but my addictions range the gamut. Shopping. Eating. Avoiding. Procrastinating. I’m addicted to binging because it makes me feel in control, if just for a moment. It lets me say — fuck you world, I’ll never be thin, so I might as well just eat and eat because it feels good… because I can do it, because no one can stop me from eating this entire box of Oreos until it’s gone — because the only person I’m hurting is myself, and it feels good to stuff my face, to empty one column of cookies from their slots and the next, to hide in my room and finish as quickly as possible to be done with it.

I used to be the same way with shopping — go to the mall, or the bargain store — and buy things I didn’t need because THAT gave me the same sense of control. It made me feel good. It was a rush… of something I could do for myself, on my own, with no one else knowing. I was in charge and in control as much as I had given up on any real control.

Do I have an eating disorder? A shopping disorder? Yes, and yes. I am an addict. And I need to stop the cycle of self abuse. But, like any other addict, I love it. Why? Is it that I feel I deserve the abuse? Yes, probably. Growing up my parents taught me to second guess myself, to not trust myself, that I was always wrong and other people were always right. Spending money, eating junk food, wasting time watching tv instead of being productive or even reading a book… forgetting how to concentrate… and finding a wild talent for daydreaming between binges, was my life. END_OF_DOCUMENT_TOKEN_TO_BE_REPLACED

I learn the most about personal finance when spending time with families. Single folks usually can hide their personal finance problems, but families tend to talk about them more openly — even if it’s just to argue about how to spend money for the day. It’s valuable to listen to people in their 30s and 40s to learn about PF issues before you encounter them.

This weekend, I got a schooling in how gambling — and more importantly, financial honesty — effects a marriage. My aunt and uncle are both fairly well off, yet own an expensive home and live in a very pricey area with two kids, so for them — even making approx $400k a year, every cent counts.

Both of them look at bills after meals and with a gasp exclaim that the meal was pricey. They offer to pay for my meals, on occasion, but you can tell in the way they offer they really want me to pick up my portion of the tab (which is fine, I just wish they’d come out and say it.)

However, the most uncomfortable part of my weekend with my aunt and uncle in Vegas was when my aunt inquired about my uncle’s gambling. Now, he wasn’t high rolling or anything… he just played a few hundred bucks in video poker. But he didn’t seem to want to tell my aunt. What made the situation worse was that he would gamble a twenty here and a ten there in front of his children, then get upset at them when they brought this up in front of their mother.

If you’re in Vegas there’s nothing wrong with gambling a little bit, but you have to set limits and more importantly, if you’re married, you have to be open with your partner about how much you’re going to spend. I don’t understand how the same couple constantly worried about every penny can function with gambling involved.

All in all, my trip to Las Vegas was depressing, especially from a personal finance point of view. Watching all of these people… rich, poor, tourists, locals, everyone – just giving away their money in hopes to win big, is almost too surreal to believe. My grandmother, for instance, plays video poker non stop. She puts in $100 and goes through it in about five minutes, only to go to the atm, pay another $5 fee, take out $100 more and go through that. She says she comes out ahead but I can’t really believe her. She does have a strategy which seems to help her “hit” on occasion, but I can’t imagine anyone who is a gambling addict could actually come out ahead always. Granted, she’s alone and her boyfriend of five years recently passed away, and she has nothing except the video poker machine to keep her company. She doesn’t travel, she doesn’t go out to fancy restaurants or shows, she just gambles. That’s her life. That’s a lot of people’s lives in Las Vegas and in the state of Nevada. It’s a sad, sad place.

At least when you are visiting the state there is a beginning and end to your gambling, but when you live there, it easily turns into an addiction. I spent about $50 on video poker, more to bond with my Grandma (who constantly screamed in my ear that i’m doing it all wrong and that I shouldn’t gamble but instead play the game the way it wants to be played) than to get rich quick (though of course in the back of my mind I was still hoping…)

I don’t understand Vegas. It would make more sense in the old school sense with cheap buffets and entertainment, all to get people to come and spend their money on roulette. But these days everything there is just so expensive. The shows, the rides, the hotels, the spas, the food… who has money left over to gamble after paying for your vacation?

If anything good comes out of my grandmother’s gambling addiction, it’s her thousands of “comps” which basically provide free room and board for her visitors a few times a year. I didn’t feel so bad wasting $50 on video poker when my entire stay was otherwise free. I can’t imagine ever going to Vegas and actually paying just to be there. It might be fun to go with a group of friends and party the night away — if you’re super rich — but otherwise, how is what happens in Vegas ever worth the price? 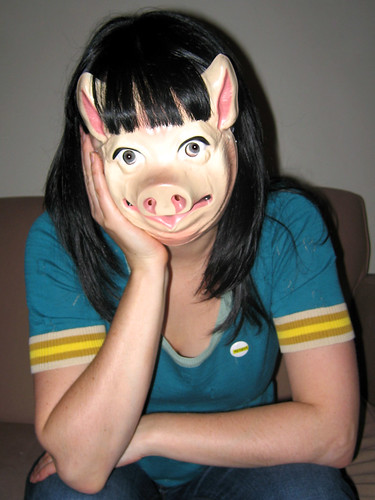 There are many similarities between a shopping addiction and eating addiction, or any other addiction for that matter. Mostly, you are ashamed of your addiction. You want to do it alone. You feel some sort of power in that you’re doing it alone, that you have control over this one thing in your life, despite it being so out of control.

For shopping, it’s my credit card bill that gets “fat.” I purposefully lost my credit card last month to stop myself. It’s not that I spend and spend, it’s just that the idea of having a credit card is that you can pay for something later. That little psychological switch makes rationality hard to grasp. It’s easy to buy something here and something else there, and before you know it you owe quite a bit of money. You need financial weight watchers.

This year, I really want to focus on getting healthy in both of these areas. Last night, I was bad. I came home and ate an entire box of bagel bites. Alone, those 500 calories would not be the end of the world, I probably hadn’t eaten more than 1000 calories earlier in the day. But then my roommate offered me a box of Oreos. I never buy Oreos for myself, and I love them so much, and I couldn’t resist.

One thing I’m looking forward to in life is moving in with my boyfriend. While we both have an eating addiction, we both realize that the worst thing to do is have food like that in the house. I’m excited about splitting the grocery bill and cooking for both of us when we live together.

How do you evade temptation?