Lean In. You can have it all. We’ve come so far in our society to tell ourselves this lie. Yet according to a new survey of super-successful women at Fortune 500 companies, women who are wealthy and highly educated reported to feel less healthy than those who were less successful. Despite the fact that these women were actually less likely to be overweight  and more likely to get six hours of sleep a night, they seem to judge themselves against an unattainable ideal, which makes them feel less healthy.

The Title of the Harvard Business Review Article “The More Women Earn, The Less Healthy They Feel.” It’s not that these women are actually unhealthy, just that they fail to find time to dedicate to their health, especially when it comes to finding time to see a doctor – 48% said they could not see a doctor due to workload. And women who are in high-powered roles find it challenging to find time to exercise – 25% had not participated in any kind of physical exercise in the last month. 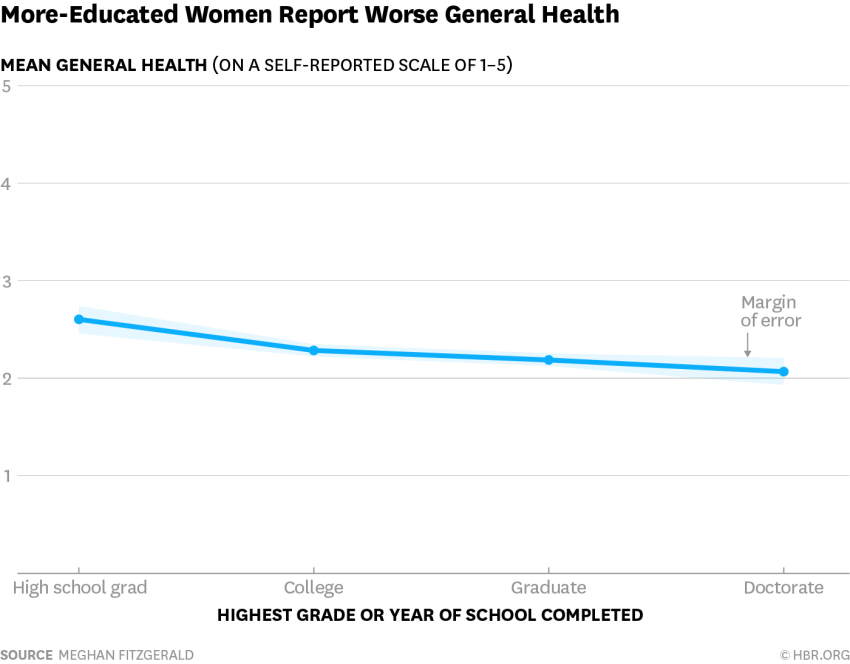 As I’ve moved up in the work world to have more responsibility, I find it much more challenging to make time for health. I’ve never been a healthy person, so I’m not the ideal sample, but to perform my job well I should wake up at 6am or earlier and be on a 7:30 train to arrive at work, stay at work until 7 and – I should – attend after work networking events, to return home late in the evening. This is overwhelming to me and I don’t even have children or other responsibilities. I’m trying now to get exercise in by having a personal trainer come to my apartment at 6am three days a week, to make me work out for an hour. But that doesn’t work well when I’m falling asleep at midnight and I need eight hours of sleep a night to function. And my diet, albeit an improvement over what I ate in my 20s, is still hit or miss. Sometimes I’ll go to bed having not eaten enough calories for the day which leads to binge eating the next day. It’s a horrible cycle.

I would assume this is just as hard for men, so the study of women only is an interesting one. There are other reports which show that men often do less housework, especially which children, so women are often more busy due to managing both household responsibilities and work. That may be why this study about women’s health is worth an HBR article.

The other thing that isn’t mentioned, however, is that women generally have more medical concerns than men, and more medical visits required just to maintain their health. I don’t have any idea how a woman finds time to see a doctor over any fertility issues – though I guess I may have to figure that out over the next year or so. As a female executive, I think there is a larger fear that every moment out of the office, every doctor’s appointment, every hour not focused on the job, will be a huge ding against one’s record. Men don’t have to worry about that (typically.) And when the majority of senior leaders in a company are men, such topics don’t come up until you have to have awkward conversations — “I’m trying to get pregnant but I can’t get pregnant so I need to take some time to go to a doctor a few times every month.” Who wants to have that conversation with their boss?

But, beyond this, it’s sad that women in leadership roles feel so unhealthy. What is wealth and success if we don’t have our health?