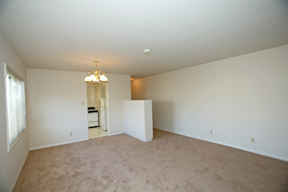 Over lunch today, I plan to drive to my apartment complex’s office and fill out a form to renew my lease for another year. I’m hesitant to do this, as I know I could be saving upwards of $300 a month if I were to live in a smaller “cozy” studio or perhaps even $500 a month if I could put up with a roommate situation. I might put off signing the lease until tomorrow, but tomorrow is the day my lease officially expires – and, as far as I know, I have until June 8 to agree to sign a new lease under the new terms.

Those terms include a rent-raise of $145 per month. My rent, for my studio, was $905 per month, utilities included (sans cable TV, internet and phone.) Now the price is being bumped up to $1050.

Realistically, I could find another studio for $850 somewhere else on the Peninsula, saving me $200 per month, or $2400 per year. But avoiding having to deal with moving again seems to be worth at least $2400. Besides, I’m still hopeful that at some point in the next year I’ll either get a raise or find a job that pays a little bit more. Most likely it will be the later, since I’m pretty sure my company is going to go under sometime fairly soon.

My rent costs have varied drastically ever since moving into an apartment in college. In Chicago, I shared a 2 bedroom with two other people. I opted for the large, door less living room and used a curtain for privacy. At the time, my parents were paying my rent (thanks mom and dad) but because I was so stingy I’d rather spend less on rent than have a place of my own and spend more. When I moved out to Burlingame, CA, I didn’t have a job – so I knew I needed to find an extremely cheap place. I ended up moving into one small room in a 4br apartment (in a nice location) for $480 a month. It was a pretty good deal, considering rents in the area. But my roommates and I didn’t get along. I was (and am) messy and they were party animals. It was a six month lease under someone else’s name. She also paid for all the utilities and charged the boarders rent. What missed me off most was the month she decided not to pay for the wireless internet (although it was supposedly included in my rent and I needed it for my freelance work and my internship). After the six months, I moved out. I was supposed to move in with one of the girls I had been living with and her friend. We found a 3br in Belmont, CA, that I think was going to be about $500 each per month. We paid our deposit of $500 each. Then, a week later, they all backed out on me. I lost $500. I was not a happy camper. At that point I figured it was worth my sanity to move into a pricey studio.

I like being around people. Sometimes. But when I come home I just want to kick off my shoes, rip off my clothes, and be naked for the rest of the evening. Seriously. I need that kind of freedom. While I make my own amount of noise (the most noise I make is when I’m singing), I can’t stand other people making noise. And while I’m a bit of a slob, I cannot put up with other people’s mess. I like having ownership of my space. It’s not just about being able to go into a tiny room, close a door and shut myself off from the world. Maybe it would be better if I had a room with my own bathroom. But I like the idea of a studio. I’m even more comfortable in a studio compared to a 1br. My studio is very spacious.

– the high ceilings and openness
– my neighborhood, even though I don’t take advantage of it.
– Location – I’m really smack dab in the middle of anywhere I’d want to be by about a 40 minutes drive either way. I’m a six minute drive from work.
– a nice pool in my apartment complex… that I used maybe twice last year. I’m
– the utilities are included, so I don’t have to worry about forgetting to pay my monthly bills
– the dressing room hallway/closet. Lets me keep my mess contained if visitors come over.
– The size – there’s room in my place for a futon and a full size bed.
– Privacy. No one knows my name. I come home, I disappear into my apartment. I like being anonymous sometimes. I mean, I’d like to get to know my neighbors, but I also like it that no one there knows who I am
– Onsite maintenance workers that are fairly responsive. No annoying landlord to deal with.
– Carport parking (no worries about finding a spot in the middle of the night)
– Decent street parking availability for guests
– Light-hued carpeting and off-white walls make apartment look even more spacious

– The cost
– That it’s a studio, so if I have a friend stay over there is absolutely no privacy
– It’s not rent controlled. I worry how much the rent will go up next year.
– The building is old. Weird things happen. The paint on my wall seems to have melted off in stripes due to the suns rays coming in through the blinds
– Most of the people who live in the complex are older families. It would be kind of nice to know a few people my age in the gigantic complex, in case I were to have an emergency.
– I’m not close to any “downtown” area. I’m a few blocks from a large shopping mall, but that’s really dangerous when it comes to my spending habits, so I avoid going there as much as possible.
– there’s no outdoor trails to rollerblade on locally, I’d have to drive to a trail to rollerblade, and I’m too lazy to do it.

But, I’ve come to conclusion that I have to live alone. At least until I’m living with someone I’m dating or married to. I think I could deal with that. I might even like it. But I just hate living with strangers. Or even friends. Well, mostly I hate living with strangers. I’ve had the worst experiences in roommate situations. And many of them were my fault. I just can’t deal with sharing my space. Sometimes the awkward situations were not my fault. In college, the second year I lived in my 3br apartment a crazy girl moved in. She was extremely overweight and had a lot of mental issues. I could put up with her, but her boyfriend just drove me crazy. He has some sort of social disorder, which is fine and all, but I felt threatened by him on occasion. Once I was watching TV in the common area and this girl got a phone call so he walked over and turned off the TV without asking me, even though it was obvious I was watching it. So I said “excuse me, I was watching that” and he says (in a very creepy, evil way) “fuck you.” I was so pissed off I walked up to him and said “excuse me, you do not talk to me that way. Do you live here?” I was very proud of myself for my defense, but ultimately the whole occurrence sent me into depression for a few weeks.

It’s just I have such anxiety when it comes to dealing with other people. I honestly feel like there has been this huge weight lifted off my chest ever since moving into my own place and getting my car for transportation freedom. All of that costs a fortune, but I think it’s worth my sanity.

Besides, I save money on not needing therapy.

2 thoughts on “Why Living Alone is Worth Half My Paycheck: Part Two”